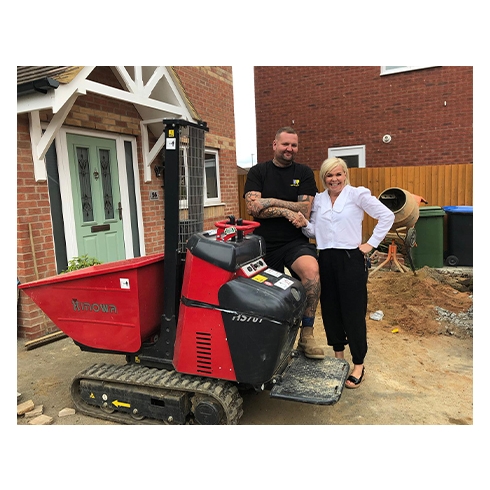 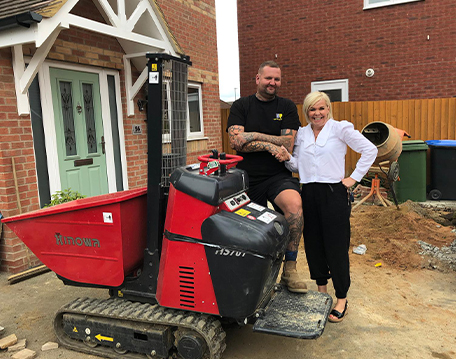 A team of landscape specialists can protect their backs, speed up their service and concentrate on the finer detail of their work after investing in a new Hinowa Minidumper.

Access Platform Sales (APS), the authorised UK distributor for Hinowa, has supplied NP Digger and Paving Services, based in Northampton, with a Hinowa HS701 Minidumper.

Company owner Neil Prosser says it is proving to be one of his best plant investment decisions as the tracked Hinowa HS701 is a highly efficient and cost-effective machine for moving material during projects.

He adds: “It’s used to do a lot of the heavy lifting involved in our work, which has greatly reduced the amount of manual handling my team has to do. It also speeds up our service. It’s a really excellent piece of kit.”

Neil also appreciated the service provided by APS. He said: “APS was able to supply the machine quickly and at a good price, and their aftersales service has been impressive.”

“As it uses Hinowa’s industry-leading narrow track body, the minidumper can operate in extremely confined spaces and on low load bearing ground like lawns and paved areas, as well as muddy terrain.”

Italian company Hinowa has a growing reputation for its range of tracked materials handling machines and access platforms, which also include tracked boom lifts and tracked forklifts.

Buying the Hinowa HS701 has proved to be a highly cost-effective option, says Neil. It has worked out to cost no more than hiring machines, as he did in the past.

But now he has the machine that is precisely right for the job. It is also ready for use exactly when he needs it, so projects can be planned with confidence.

The Hinowa HS701 MiniDumper is highly compact but still has a load capacity of 550kg. A patented high tip unloading system allows material to be dropped directly into a flatbed tipper truck, which Neil and his team find very useful.

A project to renew the rear garden of a detached house showcases the Hinowa Minidumper’s contribution to NP Digger and Paving Services’ work.

The garden could only be reached down a path that was just 800mm wide. As the Hinowa HS701 tracked Minidumper is just 760mm wide during tracking that proved no problem.

Neil and his team of three landscaping operatives used the tracked dumper to remove 22 tonnes of material. It then carried in seven tonnes of topsoil as part of a process to transform the garden in double-quick time to the delight of their customer.

Neil said: “If we’d had to wheelbarrow the material in and out of the garden, it would have taken at least five days longer, and it would have been a real strain on my team. We now have more energy and time to complete jobs to the high standards we set ourselves.

NP Digger and Paving Services have clients booked until March 2020 and having the Hinowa HS701 Minidumper gives Neil additional confidence that their schedule will not slip.