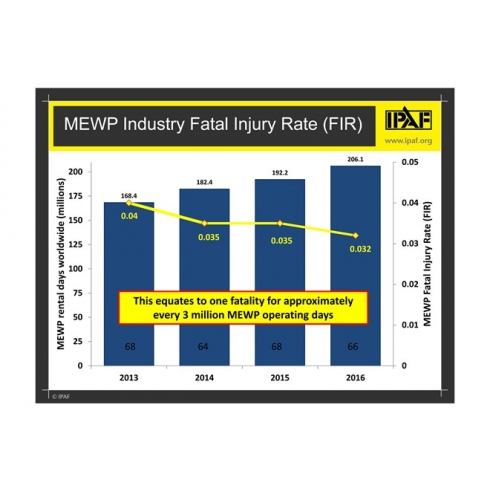 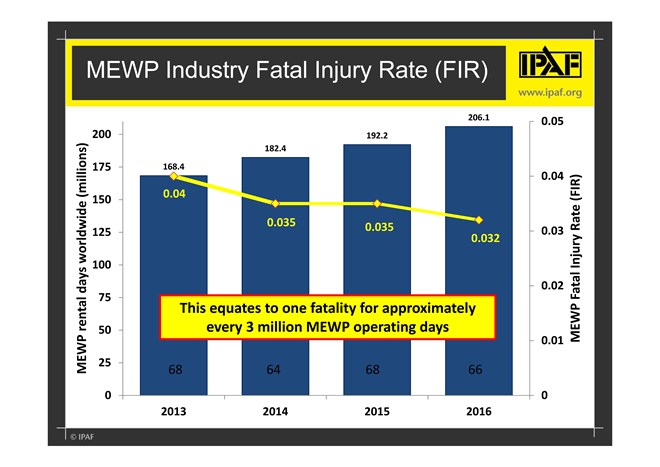 IPAF’s exclusive data found that, in 2016, there were 66 reported fatalities involving mobile elevated work platforms (MEWPs) worldwide, compared to 68 deaths reported in 2015. This is despite the fact that the global MEWP rental fleet grew from around 1.17 million units at the close of 2015 to an estimated 1.25m at the end of last year.

The fatal injury rate (FIR) for MEWPs declined in 2016, despite the fact that the total MEWP rental fleet and the number of rental days worldwide increased significantly over the same period.

Tim Whiteman, CEO of IPAF, added, “It is worth pointing out that MEWPs are still by far the safest way to work at height, and overall it is encouraging that the fatal injury rate declined last year even as the global MEWP rental market increased in terms of size and total operating hours.

“By focusing on good practice, employee training and by reporting on near misses as well as accidents and fatalities, companies can help ensure fewer people are injured or killed when operating MEWPs, and hopefully we will see that fatal injury rate decline again in 2017.”

Of the 66 reported MEWP fatalities in 2016, the main causes were falls from height, electrocution, entrapment and overturn of machinery. Falls from height accounted for 38% of the reported fatalities and electrocution was the cause in 23%. There were fewer fatal overturns, comprising 12% of total fatal incidents, as opposed to 27% in 2015. However, entrapments accounted for a higher percentage of the reported deaths than the year before, rising from 15% to 18%.

Chris Wraith, IPAF’s safety & technical executive, who compiles the global accident and fatal injuries data, commented, “While it is heartening to see the effective fatal injury rate fall at the same time as the size of the rental market and number of machine operating days have increased significantly, we must not be complacent.

“It is disappointing to see the same main causes of fatalities being repeated year on year, which suggests that the industry as a whole is not learning the lessons from previous incidents.

“Investigations show that accidents are most often due to management failings or operator error, which can in almost all cases be anticipated and avoided, or at least mitigated. This is why in 2017 IPAF is pursuing its ‘back to basics’ safety agenda, reminding operators and managers of the need for good risk assessment, choosing the right equipment for the job, proper training for users and supervisors, sound technical and safety guidance and a robust incident reporting regime under which lessons are learned and shared across the business and the wider industry.”

The MEWP fatal injury rate as calculated by IPAF takes into account the following factors: